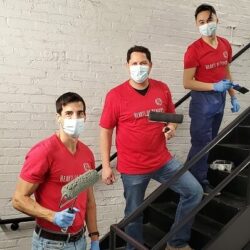 “Five years liberated from my obsession with alcohol. I do not use the word obsession lightly. When you are gripped by booze, it takes over your body, your mind — your life,” wrote McCord Henry in a post to announce his campaign to raise funds for Haymarket Center. For many years, McCord had lived with an alcohol-induced substance use disorder. Last month, however, McCord celebrated his 2,000th day in recovery. While many might celebrate such a milestone by having a party or gathering with friends and family, McCord spent his 2,000th day doing something different: training for the Chicago Marathon, in support of Haymarket Center.

As McCord turned the page on a difficult chapter in his life, he felt that he had a role to play in helping spread awareness of substance use disorders and helping others find the relief that he fought so hard to enjoy. To that end, McCord combined his advocacy with his love of running, which he credits in large part for helping him find relief from alcohol use, to launch the #LivingRecovered campaign. Under the hashtag #LivingRecovered, McCord runs marathons to help raise funds for organizations like Haymarket Center and its peers all across the country. McCord also has plans to take #LivingRecovered abroad, hoping to participate the prestigious Berlin, London, and Tokyo marathons.

By the day of the marathon on Sunday, October 10, McCord had raised more than $6,000 in donations and pledges for Haymarket Center, exceeding his original goal. While the staff and patients of Haymarket were impressed by and thankful for his fundraising efforts, McCord still had more to give. On Friday, October 7, he led a group of his colleagues from the Pendry Hotel Group, including Pendry general managers Juan Webster and Stephen Blackford, in a volunteer day in support of Haymarket, where they joined our Center’s staff in painting some of the Center’s facilities.

“When I entered Haymarket Center after months of being in touch with these amazing individuals, one word continued to come to the forefront of my mind: Hope,” McCord reflected. “Hope for myself to continue the path I am on, hope for the patients that currently call Haymarket Center home; and hope for all those who are unable to see that there is another option to living in the grasps of addiction. The work that is done inside the Haymarket Center is hope itself.”

McCord finished the Chicago Marathon on Sunday, October 9 with a time of 3 hours, 16 minutes, and 5 seconds.